One in four motorists have struggled to afford the cost of driving in the past month as the cost of running a car has risen rapidly.

The average annual cost of driving a petrol car has risen by £313 a year to just over £1,800, according to one report, adding more than a fifth to the annual cost of running a car.

One in three drivers fear they won’t be able to cover the cost of driving in the coming weeks, saying rising costs have had an impact on their work and mental health, according to the latest research from Compare the Market.

A third of those polled said they might have to take on more debt just to stay on the road.

Drivers are increasingly concerned about the rising cost of owning a vehicle, as fuel prices continued to soar in the UK last week and insurance prices jumped by almost £100 per year.

More than 80% of motorists said they had spent more on fuel in the past six months, with a third having had to pay more for car insurance policies amid rising costs.

This sharp increase in running costs is mainly due to the increase in the price of petrol which is already within a penny of this month’s record high – and is expected to continue to rise.

On Sunday, the price of a liter of diesel rose above £1.80 for the first time on record.

Meanwhile car insurance premiums for petrol cars have risen by £82 year-on-year, due to an increase in the value of used cars and parts inflation spare.

Some 60% of motorists now think driving has become too expensive for most people, as more than eight in ten drivers are now concerned about rising petrol and diesel prices.

About 40% of drivers say they don’t earn enough to cover high costs, with that figure rising to 55% for those aged 25 to 34.

One in three motorists also expect to take on more debt just to stay on the road, as one in five admitted to asking family or friends for financial support.

People’s social life is another aspect that has been affected, with 38% of drivers saying their social life has deteriorated, rising to 52% for those aged 25-34.

Four in ten motorists also visited family less, due to the cost of driving, as half of motorists said they made fewer journeys and used less fuel, while a quarter cut back on spending somewhere else just to pay for fuel.

Alex Hasty, director of comparethemarket.com, said: “As the cost of driving rises, it is becoming difficult for many drivers to stay on the road.

“A lot of people who don’t live in a big city rely on their car to get around. However, high fuel costs are now forcing drivers to make fewer trips, and some are having to cut back on visits with friends and family. 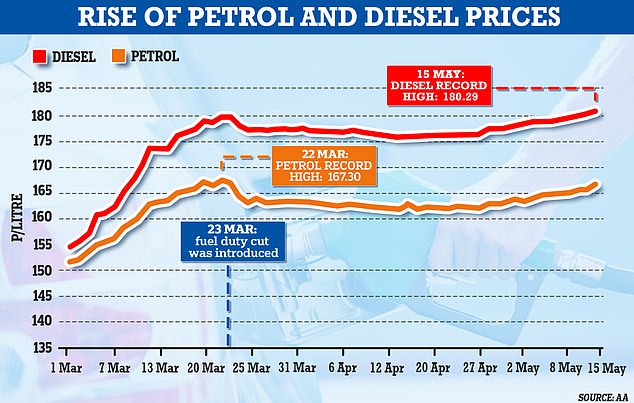 Fuel prices have skyrocketed in recent months due to the war in Ukraine. A liter of diesel now costs over £1.80, while unleaded is a penny off the previous record high

“It is concerning that a number of people expect to go into debt to continue driving.

There are several ways to save money on your car, from lowering the cost of your insurance to driving more fuel-efficiently.

Hasty said: “There are several ways motorists can save money to help offset the higher costs. Driving smoothly and removing heavy objects from your car can help your vehicle consume less fuel.

“Ensuring your tires are at the correct pressure not only improves your car’s safety, but it can also reduce gas costs and help your tires last longer.”

You should also make sure your care is in top condition, by regularly checking your tire pressure, putting your car in “eco mode” and avoiding any breakage or sudden acceleration when you’re on the road.

Meanwhile, short-term car rentals could be the way to go for households looking to save money but still have access to a vehicle, says Virtuo CEO Karim Kaddoura, because the personal car average remains inactive for about 95% of its life.

He said: “Coupled with the fact that on average UK car owners spend over £3,000 running their cars every year, and the average purchase cost alone is £20-40,000, it’s no surprise that more and more people are turning to sharing or renting. vehicles, as a way to save money.

“It’s entirely conceivable that consumers are now asking, ‘Do I need to own a car?’ when they have to watch every penny.

“In addition to the obvious financial benefits, there is also an environmental element that is becoming an increasingly important factor in people’s decision-making.”

Young drivers can also save on car insurance by opting for black box policies.

Would you consider a telematics black box car insurance policy if it would save you over £89 a year?

Telematics premiums are said to be the cheapest insurance option for four out of five drivers aged under 20 and two-thirds of drivers aged 21 to 24.

According to another study by Compare the Market, two-thirds of drivers aged under 20 could halve their annual cost and save an average of £1,137 a year.

“Motorists could also save over £100 by switching to a cheaper insurance policy before they renew,” Hasty added.

Switching car insurance appears to be something many motorists are not used to doing, as 17million drivers are said to have let their car insurance renew automatically last year at a cost of £830million.

And, although the cost of auto insurance may have accelerated, you can still save around £120 a year by switching providers when your insurance is in place.

Hasty added that having reminders in place is crucial to ensure you don’t overpay your insurance when you’re ready for renewal.

He concluded, “With Compare the Market, customers can set up automated auto insurance renewal quotes and get automatically notified, which could help them find great deals and save money.”

Some links in this article may be affiliate links. If you click on it, we may earn a small commission. This helps us fund This Is Money and keep it free to use. We do not write articles to promote products. We do not allow any business relationship to affect our editorial independence.