This is the moment a reckless driver crashed his car – because he was too busy filming himself singing a Gers song.

The hapless Rangers fan was singing the dance floor I’m Feeling It behind the wheel when the crash happened.

The success of Sunset Bros has become an anthem for the Light Blues to accompany celebrations of big wins.

In his own video footage, uploaded to Snapchat, the driver can be seen approaching traffic lights as they turn orange.

But he doesn’t notice that the red engine in front of him stops and crashes into the back of it.

The incident is believed to have happened in Kilwinning, Ayrshire, on Monday. 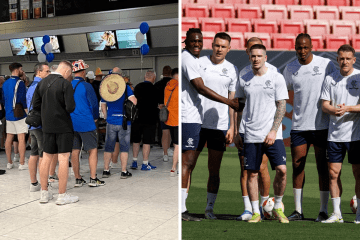 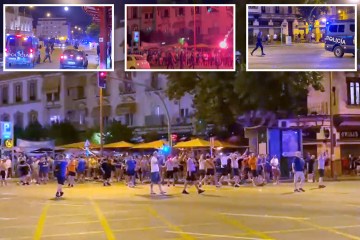 It is not known whether the driver or someone in the other vehicle was injured in the collision.

A police spokesman said officers had not received any reports of an accident in the area.

We told earlier how the dance duo behind the Rangers anthem ‘I’m Feeling It’ signed on to perform the song LIVE at Ibrox.

DJ Adriano Mercurio, from Sydney, Australia, admits he was blown away and is now a fan of Light Blues.

He said: “It’s heart warming to see so many people side by side shouting it out loud.

“That’s what football fans deserve. We will never forget it.

“Rangers are one of the biggest clubs in the world.”

The Ibrox side will face Eintracht Frankfurt in the Europa League final at 8 p.m. tonight.

Almost 200 Rangers fans seeking to travel to Spain for the big game were stranded at Glasgow Airport for 10 hours yesterday.

Light Blues fans were due to fly to Jerez airport, around 100km south of Seville, at 10.30am.

But 189 fans were still stranded at Glasgow Airport around 8.30pm last night as they waited nervously in the terminal.

The flight has since been diverted to Malaga, leaving travel arrangements in abeyance.